“While music may be shaped by the people who first make and use it, as experience it has a life of its own.” — Simon Frith, sociomusicologist

What connects the Foo Fighters, James Blunt, and Eminem?

On the surface, not much—they are a rock band, a singer-songwriter, and a rapper. Their music feels and sounds pretty different. Are their lyrics similar? Not really. Have they ever collaborated? Nope. They’re so musically distinct that James Blunt once trolled Foo Fighters fans by announcing he was replacing them as a festival headliner on Twitter. In fact, what these artists have in common is that people invoke their songs in a literal fashion online—they use Foo Fighter’s “My Hero” to deem a deed heroic (perhaps ironically), James Blunt’s “You’re Beautiful” as a compliment, and Eminem’s “Stan” in reference to stanning (obsessively supporting) a celebrity.

Large-scale analyses of music have made incredible progress in analyzing how people listen to music in private on platforms like Spotify, and in extracting musical features from raw audio signals. These techniques give us a computational framework to measure which pieces of music are musically similar.

But music is social. As sociomusicologist Simon Frith contends, “Music, as experience, has a life of its own.” Just as you can’t fully understand language by only reading the dictionary, you can’t fully understand music by only examining its audio signals or knowing what people listen to in private. In this way, existing computational methods often miss the social contexts and meanings of music. For example, they probably couldn’t tell you that Eminem, James Blunt, and the Foo Fighters would be shared similarly online. Of course, social scientists and musicologists deeply understand how music is rooted in social context, but typically conduct small case studies to achieve this depth of understanding.

In our research paper, we develop a large-scale computational methodology for understanding how music is shared in the wild, and apply it to a new dataset of music sharing on Reddit.

Reddit, a social discussion platform, hosts thousands of communities dedicated to a huge variety of topics. Different communities, or “subreddits”, attract different kinds of audiences, each with their own social contexts and norms. This makes Reddit an ideal environment to study music’s “life of its own”: by analyzing the communities in which a particular artist is shared, we can shed light on the social contexts they appear in. To this end, we extracted 1.3 million instances of people sharing Spotify or YouTube links to songs on Reddit, together with the subreddits they appeared in (we’ve made this dataset publicly available and can be downloaded from our repo here).

How do we quantify social context from subreddits? In recent work by our lab, we showed how to embed communities into a vector space such that two communities are close together if their memberships are similar (link). Furthermore, we showed how to find meaningful dimensions in this space, allowing us to assign scores to communities according to how left- or right-wing they are, or how young or old they are, or how masculine- or feminine-oriented they are (link). Building off of these methodologies, we sought to answer the following questions:

Which groups of artists are shared similarly online? What social contexts of music can we infer from the communities artists are shared in? How can we measure the extent to which an artist’s sharing is extra-musical (shared for reasons beyond the music itself)?

Similarity in where artists are shared

We embedded artists into our Reddit vector space by computing a weighted average over communities they appeared in. Artists that are shared in similar social contexts are positioned close together in the space. To identify groups of artists shared similarly, we clustered them based on their embedding positions into social genres, shown in Figure 1 (every point represents an artist, and points are coloured according to their social genre). Social genres reflect similarities in how artists are shared, not necessarily similarities in how they sound. While some artists end up in social genres that reflect their musical genre, like pop and metalcore, other social genres, like politically engaged and internet culture, draw new relations between the musicians. Artists in the politically engaged social genre, such as Rage Against the Machine, Killer Mike, and Dead Kennedys, are known for their political music and tend to be shared in more political communities. Artists in the internet culture social genre, such as Queen, The Lonely Island, and Rebecca Black, have become associated with norms, memes, and fads on the Internet (e.g. “Don’t Stop me Now”, “I’m On a Boat”, “Friday”). In Figure 1, related social genres tend to be in close proximity, like rap, rap 2, and rap 3. Near the bottom, we also see an electronic music cluster that includes edm, edm 2, monstercat, electronica, and indietronica. 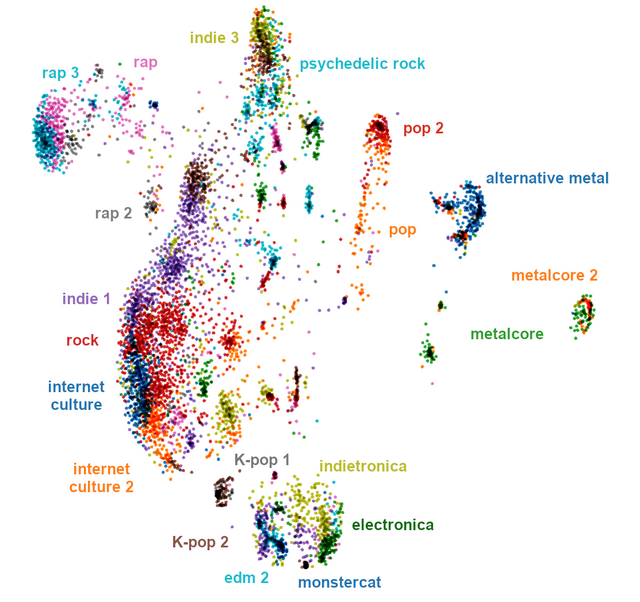 By studying invocations of music in public, as opposed to listening in private, we can measure the social contexts artists appear in. If an artist is shared in communities associated with younger audiences, such as r/teenagers and r/highschool, we infer that they appear in younger contexts than one shared in r/AskOldPeople; if an artist is disproportionately shared in r/Conservative and r/The_Donald, we infer they appear in more right-leaning contexts than one shared in r/SandersForPresident. Using the methodology we developed in prior work, we projected all artists into social spaces according to the contexts they appeared in. For example, Figure 2 shows how the top 400 artists are positioned along the gender and age dimensions. Musicians like XXXTENTACION, Travis Scott, Playboy Carti, and Jay Rock appear in younger contexts than Frank Zappa, Phish, and Dead Kennedys, whereas Armin van Buuren, deadmau5, and Nas appear in more masculine-oriented contexts than Kylie Minogue, Girls’ Generation, and Christina Aguilera. Controlled pairings of artists can also be analyzed with this visualization. For example, A$AP Rocky and BTS appear in similarly young contexts, but differ greatly in the gender associations of the communities they are shared in. 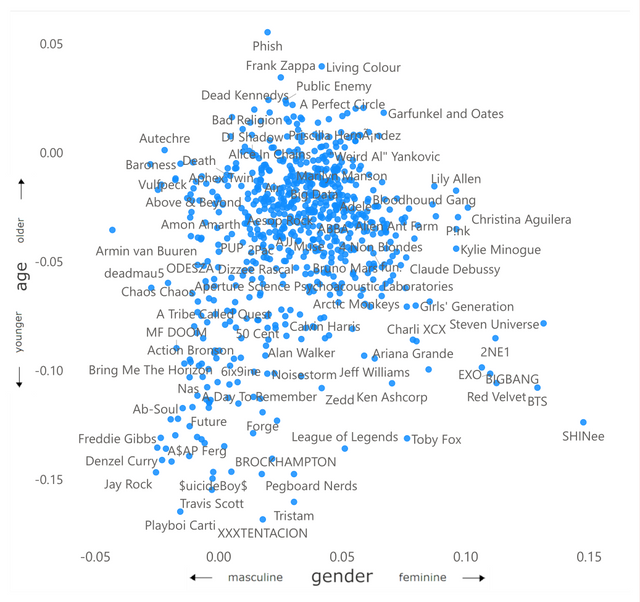 As we have seen, music has a life of its own—on Reddit, for example, artists often become associated with additional meta-meanings that go beyond the music itself. The canonical example of this is rickrolling, where someone pretends to link something interesting but actually links to Rick Astley’s “Never Gonna Give You Up” (see this infamous article on the topic). We developed two scores that capture “extra-musical” sharing like this, each based on an intuitive observation.

Extra-musical sharing tends to be occur in diverse contexts

When an artist’s sharing is mostly driven by the music itself, it tends to occur in a tightly-knit set of (often music-related) communities. For example, the South Korean boy band SHINee is shared almost exclusively in r/kpop and r/kpophelp. In contrast, when an artist has developed extra-musical associations, they are shared widely across the platform. Kool & The Gang’s song “Celebration”, for instance, is frequently invoked in relation to some kind of success, and these shares occur everywhere from r/AskReddit to r/Music, and from r/The_Donald to r/ukpolitics. We take disproportionately diverse sharing, controlling for popularity, as a signal that music is shared on a meta level. The top five most widely-shared artists relative to their popularity are shown below. As the track names suggest, the tracks are often invoked to add an extra punch to a message that would otherwise be purely textual. “I’m So Excited”, “Celebration”, “One Day More!”, “Holding Out for a Hero”, and “You’re Welcome” are not only catchy songs, but form the way users interact on Reddit. “Holding Out for a Hero” has been used in r/politics to signify anticipation for a change in leadership and “You’re Welcome” is naturally linked in a response to gratitude.

As is evident from the Rick Astley example, some songs can become associated with a meme. And anecdotally, this is common. To measure how meme-driven an artist’s sharing is, we develop a “meme”-dimension in our embedding space and score every artist on this dimension. Here are the top five artists on this meme dimension. Luis Fonsi scores highest on this dimension because of his song “Despacito” which is linked whenever someone comments “this is so sad alexa play despacito”– a frequent humorous response to bad news on Reddit. Video Game Players and Valve Studio Orchestra both produced songs for famous video games like DuckTales and Team Fortress 2. Video game culture is closely related with meme-culture on Reddit leading to video game songs to be invoked in meme communities. Blonde Redhead is an indie rock band that produced the song “For the Damaged Coda”. After 17 years of limited success, this song was picked up by Rick and Morty and is now invoked for its change in riff at 37 seconds illustrating an unwanted surprise.

We’ve introduced a new form of analysis that can complement existing computational and qualitative approaches to the study of music. Our measurement of the social contexts of music sharing can provide a starting point for deeper investigations by musicologists and sociologists. Our computational approach could also help improve music recommendation systems. Currently, recommendations are based on acoustic features and private listening habits, but can be blind to the social contexts that may be important to listeners. Our techniques could be a way of incorporating the social dimensions of music into recommendations. You can read our paper here, explore the artist embedding here, and view the code and data here.

The Computational Social Science Lab is an interdisciplinary research lab located in the Department of Computer Science at the University of Toronto. We focus on research at the intersection of computer science and the social sciences.
About us Our research